Home > Conservation > Be Smart and Green, Save 15

Save Our Water Campaign 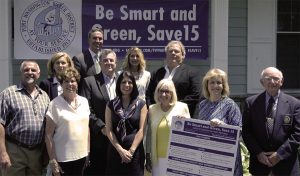 The Port Washington Water District (PWWD) is setting the benchmark for water conservation with its progressive and proactive ‘Be Smart and Green, Save 15’ campaign. Joined by local government officials, the District laid out plans last summer to reduce District-wide water consumption by 15 percent during the irrigation season.

The campaign reflects estimates by the New York State Department of Environmental Conservation (DEC) that pumpage amounts may be surpassing Nassau County’s permissible yields by 15 percent. The ‘Be Smart and Green, Save 15’ water conservation campaign is vital to the sustainability of the District’s sole source aquifer. During the peak water consumption season, it is important to implement some simple yet effective conservation tactics to conserve the world’s most precious natural resource.

The campaign has been designed to educate residents and to provide helpful suggestions to effortlessly reduce their water consumption. If the District continues pumping at current levels, it will be jeopardizing the future sustainability of the peninsula’s water supply by introducing the irreversible effects of saltwater intrusion. The District encourages all residents to strictly adhere to Nassau County’s ordinance of the odd-even watering schedule as this will have a positive impact and contribute to conservation goals in a very significant way.

Aside from educating residents, the District has expanded its water conservation program by implementing a distribution leak-detection program that has already identified 17 locations where water is being wasted. By fixing these leaks alone, the District anticipates achieving a water savings of more than 113,000 gallons per day. In addition, the District will consult with its top water users to improve their water efficiency by reviewing existing irrigation systems to reduce water waste.

In 2016, the District pilot-tested EPA WaterSense smart irrigation controller technology at its administration building, which resulted in a significant reduction in water usage while maintaining a green lawn. The District is identifying and targeting locations where water is unnecessarily being wasted. The use of state-of-the-art technology has enabled the district to save large sums of water. The District’s smart irrigation controller pilot program at its headquarters has kept the lawn and plants green while saving more than 52,000 gallons of water since the program was introduced last summer.